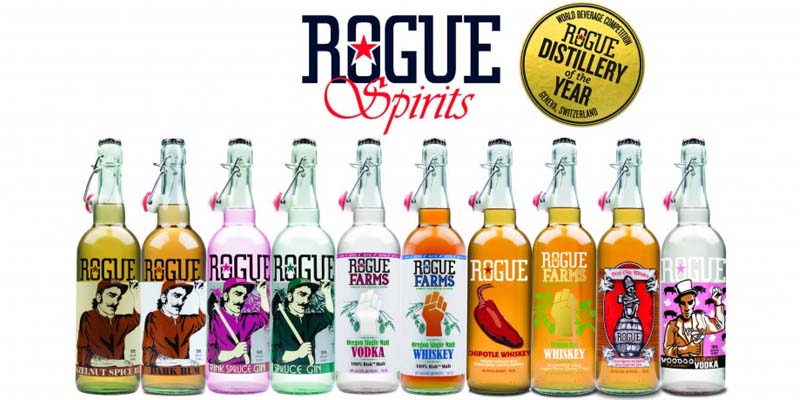 In 1987, some like-minded Rogues had an idea to start a “Brew Pub”. The next year, a Revolution in beer began in the basement of the Rogue Public House in Ashland, Oregon. The Brewery and Pub opened in October 1988 with the brewery housed beneath a 60 seat Pub. The first beers brewed were American Amber and Oregon Golden.

The brew pub was located in a very pretty and scenic location along a little stream called Lithia Creek. The beer flowed freely and soon Rogue began to seek new land upon which it could grow the Revolution.

In early February 1989, one of Rogue’s founders wandered to Newport in search of the perfect place for another Rogue pub. A terrible and unusual snowstorm struck and our founder was stranded in Newport along its Historic Bay Front. He walked the streets and happened upon Mohava Niemi, founder of Mo’s Restaurants. Mo extended her signature hospitality, welcoming him to the city with a her famous clam chowder. Over a bowl, Mo shared her dream of living above a bar and described the perfect spot for the next Rogue Ales Brew Pub. Mo had a large building that sported three apartments upstairs, a sweater shop, an art gallery, 1,100 sq. ft. of empty storefront, and an 800 sq. ft. garage that was used to store antique cars.

Construction began immediately on Rogue’s Bayfront Brew Pub. Moving a step up in the world, our brewery, which began in a basement in Ashland, was now operating from a garage in Newport. The front of the house was readied.

A short three months later, in May of 1989, John Maier joined Rogue. A Seibel Institute graduate, John’s career prior to brewing for Rogue was engineering. He was a Senior Technician with Hughes Aircraft Co. in El Segundo, CA. for over a decade.

Rogue’s Bayfront Pub opened in May of 1989, with a small but enthusiastic crowd, made up of curious locals who dropped by to see what was happening…and then never left. Many of our first patrons were like family – helping with construction, building a community and participating in projects as needed. The names of many of these early pub-goers have been immortalized with brass plaques that grace the bar today. One of our most notable Rogue patrons was Chuck Linquist. Chuck was retired and had a lifetime love of beer. Chuck crafted the shelves that line the bar area, installed our light sconces and bequeathed most of the memorabelia that rests along the shelf above Mo’s picture at the bar.

So begins the story of Rogue Ales and Spirits, enjoy!