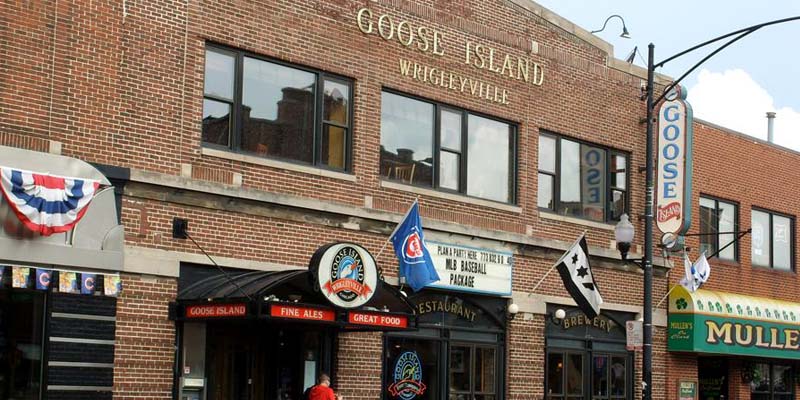 Founded in 1988, Goose Island Beer Company was the result of a trip to Europe by Goose Island Founder John Hall. Hall was able to discover the unique styles and selections of Europe’s regions, and decided that “American deserves some damn fine beer like this, too.”

Craft brewing wasn’t widely known at the time, but upon return from his European sojourn, John set out to change all that. He settled down in his hometown of Chicago—a city perfect for craft beer, with rapidly evolving tastes and the largest system of fresh water on the planet. And then he got to brewing.

First he made some stellar beer. Then he invited his consumers in to watch his process at the brewery, bringing them behind the scenes every step of the way. The result was a new fascination with craft brewing, and beer that not only catered to people’s tastes, but challenged them as well.

That was back in 1988, and Goose Island hasn’t slowed down since. By 1995, John’s beer had become so popular that he decided to open a larger brewery, along with a bottling plant to keep up with demand. 1999 brought even more growth, along with an additional brewpub, and today, what was once one man’s pint-filled dream has become the Goose Island empire you know and love.

In 1992, Goose Island gave the beer industry a new reason to belly up to the bar: bourbon-aged beer. Goose Island pioneered the process, and it begins with first-use bourbon barrels. Goose Island brewers only choose those that have had held sweet, sweet whiskey in their bellies for an average of 8 years, then they age our beer inside for 8-12 months. This process takes place in a non-climate controlled space, allowing exposure to the extreme heat and cold of Chicago’s ecosystem, which contracts and expands the wood, pulling the barrel’s whiskey character into the brew. Each barrel is used only once, ensuring the best quality taste in every pint.

That first barrel-aging process yielded our ever-tasty Bourbon County Stout back in 2004. Three years later, Goose Island decided it was time to expand their barrel-aging program again. But this time our brewers brought wine barrels into the picture. They started with beer that had undergone primary fermentation in stainless steel casks, then transferred it to wine barrels, soaked with flavor. Next came fresh fruit and wild yeasts, and the beginning of a secondary fermentation inside the barrel. Aging went on for 9-18 months, creating beer with unprecedented depth of character, increased acidity and a light essence of fruit without too much sweetness. The variety of wine barrels they use now yield some of their most unique brews, including Sofie, Juliet, Lolita, Madame Rose, Gillian and Halia.