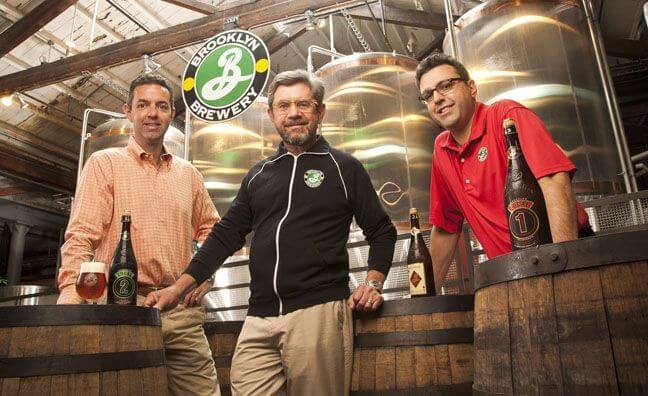 In 1984, Brooklyn Brewery founder, Steve Hindy, ended a five and a half-year tour as the Middle East Correspondent for the Associated Press. During his years in the Middle East, Steve befriended diplomats based in Saudi Arabia, where Islamic law prohibits alcoholic beverages. The envoys were avid homebrewers and happily plied Steve with their flavorful beers. Once he returned to Brooklyn, Steve’s experiences in the Middle East inspired him to start brewing at his home. Enlisting his downstairs neighbor, Tom Potter, Steve set out to establish Brooklyn Brewery.

Steve and Tom commissioned fourth-generation brewmaster William M. Moeller, a former head brewer at Philadelphia’s Schmidt Brewery, to brew Brooklyn Lager. Moeller pored over the brewing logs of a grandfather of his who had brewed in Brooklyn at the turn of the last century to develop a recipe for Brooklyn Lager. The result was an all-malt lager beer with a tangy aroma created by “dry-hopping,” an age-old technique of adding hops during the maturation process to create a robust aroma. Brooklyn Lager made quite a splash in the 1980’s beer scene in New York City, dominated by the light, rice and corn lagers sold by Budweiser, Miller, and Coors.

Since then the portfolio of Brooklyn Brewery has grown to a wide-ranging collection of beers, always keeping an eye to traditional brewing techniques, even as Brewmaster Garrett Oliver and his team seek to push the boundaries of beer. It’s now easy to find a smooth Brooklyn Lager, hoppy East IPA, or roasty Brown Ale in your favorite watering holes.

Today, the Brooklyn Brewery continues to thrive, spreading good beer around the world.