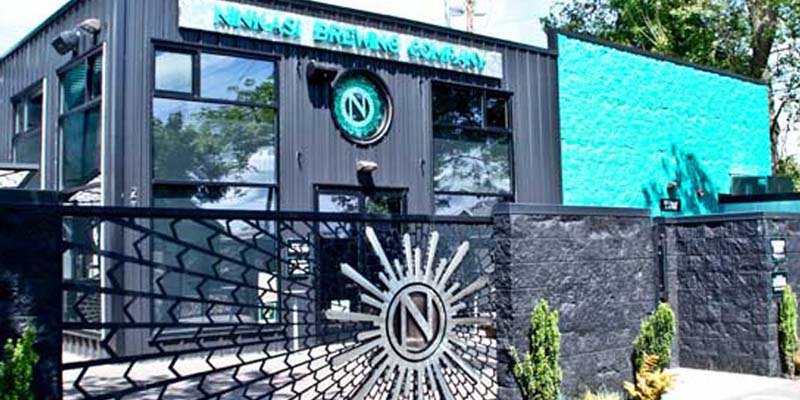 In late 2005, Nikos Ridge and Jamie Floyd met at a favorite local bottle shop in Eugene, Ore. Nikos was sampling a beer Jamie had brewed at a local restaurant/brewery and through mutual friends, the two started talking. The conversation landed on the question, “What would you do if you could open your own brewery?” With Nikos’ background in finance and Jamie’s experience in brewing, it seemed like the perfect pairing to start a brewery.

The two began brewing about six months later, on June 15, 2006, when Nikos and Jamie spent 17 hours brewing the first batch of Total Domination IPA. The first kegs were produced in a leased space inside of a German restaurant in Springfield, Ore. Once a brewery, the building was equipped with a 15-barrel brewhouse. Here, a new craft brewery was born with one driving purpose—through the creation of the highest quality beers; to improve the lives of its customers, the residents of its communities, its employees, and business partners.

Both founders knew they wanted to do things differently—within the beer industry and in the local community. In a time when the industry landscape was home to male-centric brands, Nikos and Jamie strived for a company that represented what beer meant to them—a source of community and the root of human existence. And so, Ninkasi—the Sumerian goddess of fermentation—was selected as the name. Throughout human history, beer not only was a catalyst for written language and organized education, but was also the center of community and culture, one never in operation without the other—a driving force behind the new brewery. In a quest to find property that could cultivate community spirit, the two purchased real estate in Eugene’s Whiteaker neighborhood and moved the brewery to its current location in 2007.

Since then, Ninkasi has undergone four expansions, to produce more beer for more people. The expansions included a larger production facility, tasting room, office spaces, and local distribution, all while keeping the focus on brewing excellent craft beer. Ninkasi’s culture continues to embody “Believe in the Goddess”—symbolizing the Ninkasi belief in an elevated human experience through the social enjoyment and sharing of beer.

The ancient Sumerians worshipped the beer they made and praised the Goddess Ninkasi for the miracle of fermentation. As one of the first-known communities, the Sumerians began to forgo hunting and gathering for an agrarian existence, establishing the first foundations of modern civilization. They understood the value of beer in their communities and relied on the brewery as a pillar and hub of social connectivity. Additionally, beer and the fermentation process provided potable water, nourishment, health, and joy. It was the catalyst for written language and education; all valuable contributors to an evolved quality of life and living.

Today, Ninkasi Brewing Company is dedicated to brewing the highest quality craft beers in support of culture, community, and the uniqueness of each individual and their passions—while evoking as much enjoyment as possible along the way! We believe in and are committed to sharing experiences that create value for our customers, our partners, and our communities in service to our core purpose: to Perpetuate Better Living. Beer is a staple of civilization. Believe in the Goddess.