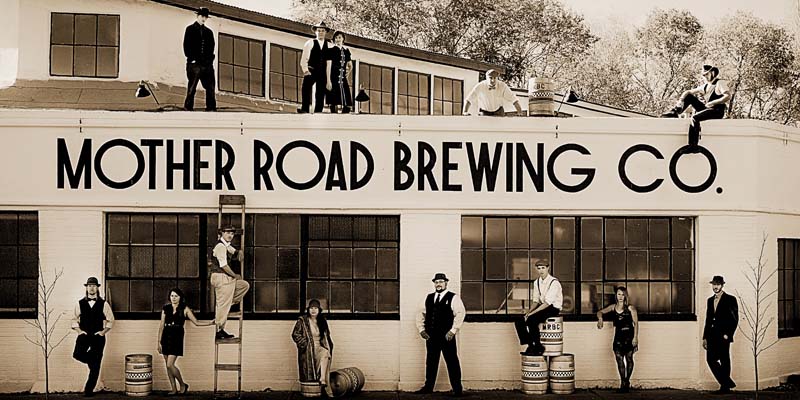 A new brewery for Flagstaff was conceived in 2004 by Michael and Alissa Marquess. Their love for craft beer, motoring, and Flagstaff united to form Mother Road Brewing Company in 2012. The brewery was under construction from December 2010 through September 2011 and opened its doors to the public on November 17th, 2011.

The Marques family founded the brewery and was assisted by Urs Riner, Head Brewer and part owner of Mother Road Brewing Company. Urs is a graduate of Northern Arizona University and the UC Davis brewing program.

The Brewery and Tap Room are located on the Southside of Flagstaff’s Mike’s Pike, the original alignment of US Highway 66 as it came through Flagstaff. In the late 1930’s, Route 66 was realigned to travel under the railroad line one block west, to handle heavier traffic.

The Mother Road was John Steinbeck’s name for US Highway 66 in The Grapes of Wrath when it carried the Joad family west in the 1930’s. It was a road of desperation and flight, but also one of hope and new beginnings.

The Milum Building was built by the Milum family in the 1920s and housed a commercial laundry, which they operated until the late 1990s. Following a series of short-lived businesses and a period of disrepair, the Milum Building now has three long term tenants and is enjoying a renaissance with these shops: Pizzicletta, Flagstaff Bicycle Revolution, and of course, Mother Road Brewing Company