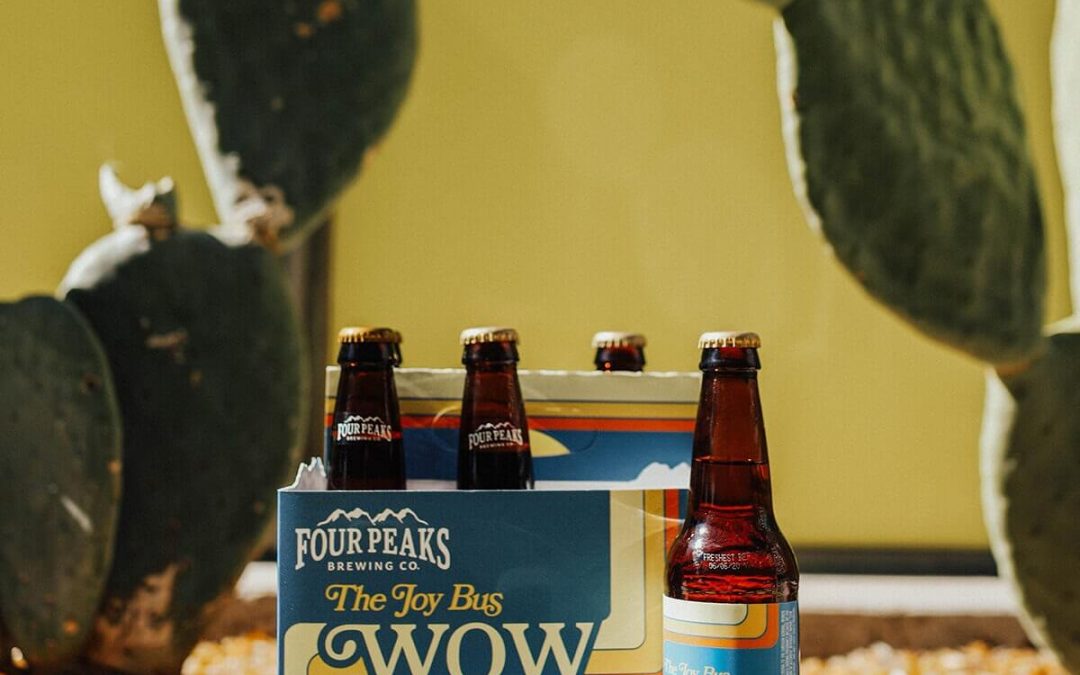 Four Peaks Brewing Co., one of Arizona’s best-known and most beloved breweries, has launched a brand-new beer that doesn’t just taste good – it does good as well.

The Joy Bus WOW Wheat Ale is a wheat beer brewed in collaboration with Phoenix-based charity, The Joy Bus. This American-style brew is the follow-up to the wonderfully successful Joy Bus RAD IPA, which was Four Peaks’ first collaborative release with The Joy Bus. Since its release in June 2020, the IPA has helped raise thousands of dollars for The Joy Bus – so crafting a second brew was an easy “yes.”

Supporting an Outstanding Cause with Every Sip

Much like Four Peaks Brewing Co., The Joy Bus is an Arizona-grown organization deeply rooted in the Valley community. Founded by restaurateur Jennifer Caraway, the charity was inspired by a dear friend’s struggle with ovarian cancer.

After Caraway’s close friend, Joy, was diagnosed with cancer in 2011, Caraway provided comfort and love in the form of homemade meals. When Caraway witnessed the positive impact that the food – and the camaraderie – had on Joy, she began searching for ways she could help other cancer patients in the same way.

And thus, The Joy Bus was born. Powered by a dedicated team of volunteers, the program delivers delicious, healthy meals to homebound cancer patients throughout the Valley. The meals are specifically prepared to meet the needs of program participants, then delivered directly to their homes by friendly, compassionate volunteers (many of whom are cancer survivors themselves).

In 2016, Caraway opened her 100% non-profit restaurant, The Joy Bus Diner, to help fund the program. In the five years since it began, The Joy Bus has delivered thousands of chef-made meals to cancer patients in Phoenix.

The Joy Bus WOW Wheat Ale is now joining the Joy Bus RAD IPA in raising more funding for the organization, with a percentage of every bottle, can, and pint going straight to The Joy Bus.

Fabulous Flavor and a Lot of Heart

Four Peaks Brewing Co. is a legendary presence on both the local and national craft beer scene, known for its flawless flavors and impeccable-quality brews. So, it comes as surprise to no one that the Joy Bus WOW Wheat Ale boasts a delicious, refreshing taste that will keep you coming back for more.

It’s an America-style wheat ale brewed with sweet orange peel, then fermented with Four Peaks’ signature house yeast. The bright, sweet flavors of citrus are beautifully balanced by notes of soft wheat, apple, vanilla, and juicy apricot, making this a brew for all seasons. It’s a light-medium bodied beer that leans slightly malty.

At 5.0% ABV, the Joy Bus WOW Wheat Ale is a craft beer that’s sure to appeal to a diverse range of brew enthusiasts.

Give Back with Your Next Beer

A fantastically-flavorful wheat ale that contributes to a beloved Phoenix non-profit? Now that’s a perfect pairing.

Four Peaks Brewing Co. is one of the most recognizable names in Southwestern craft brewing, with a long legacy of exceptional beers. For many beer drinkers, spotting a Four Peaks Brewing Co. beverage is one of the best ways to know that they’re in a place that truly knows a thing or two about craft beer – and is a supporter of local Arizona breweries. And with the additional benefit of being able to support an incredibly worthy cause, contributing directly to improving the lives of cancer patients, customers will surely fall in love with the Joy Bus WOW Wheat Ale.

The Joy Bus WOW Wheat Ale is now available throughout Arizona, including in bottles, barrels, and six- and 15-packs of cans. For more information about this beer from Four Peaks Brewing Co., including how to add it to your next beverage order, connect with our team today.