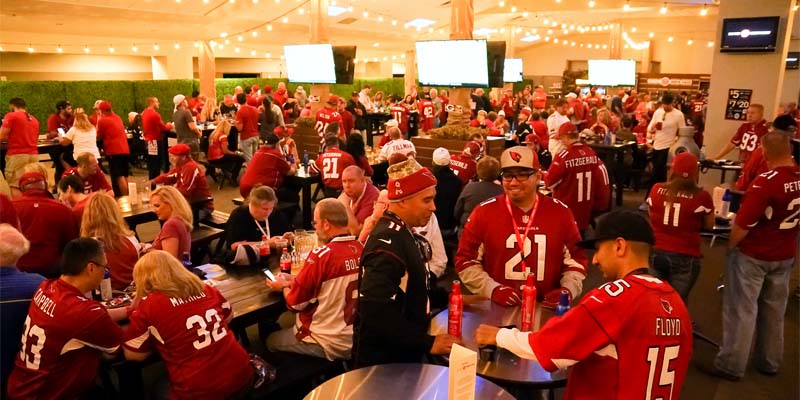 The enormously popular entertainment option Big Red Brew Haus returns for its second year in 2016. Opening 3.25 hours before each game, and located on the service level of the stadium, the Big Red Brew Haus features a variety of beer selections, a traditional Brew haus menu and flat screen TV’s throughout for fans to enjoy early NFL action. There is no charge for entry and guests can enter at Gate 2 by taking the escalators downstairs.

A  new  entertainment  option  for  fans  this season, “Monday Nights at the Big Red Brew Haus”  will  take  place  inside  University  of Phoenix Stadium. The event will include a Cardinals player appearance each week where the player will appear on ABC-15 and interact with fans on site.

Parking and admission are both free. Food and beverage is available for purchase.

Prior to daylight saving time taking effect on the first Sunday in November (Nov. 6), doors to the Brew Haus will open at 5:00 PM. After that, doors to the Brew Haus will open at 6:00 PM. The Big Red Brew Haus is also open on game days at University of Phoenix Stadium with a traditional Brew Haus menu and TV’s to enjoy NFL action. The first edition of the “Monday Nights at the Big Red Brew Haus” featured an appearance by All-Pro CB Patrick Peterson. “It’s always great to get out and interact with the fans and I enjoyed the opportunity to be the first-ever guest,” Peterson said. “I had never been to the Brew Haus before because obviously we are pretty busy on game days. But it’s a great atmosphere and set-up for watching the Monday night game and I think fans will love it.”