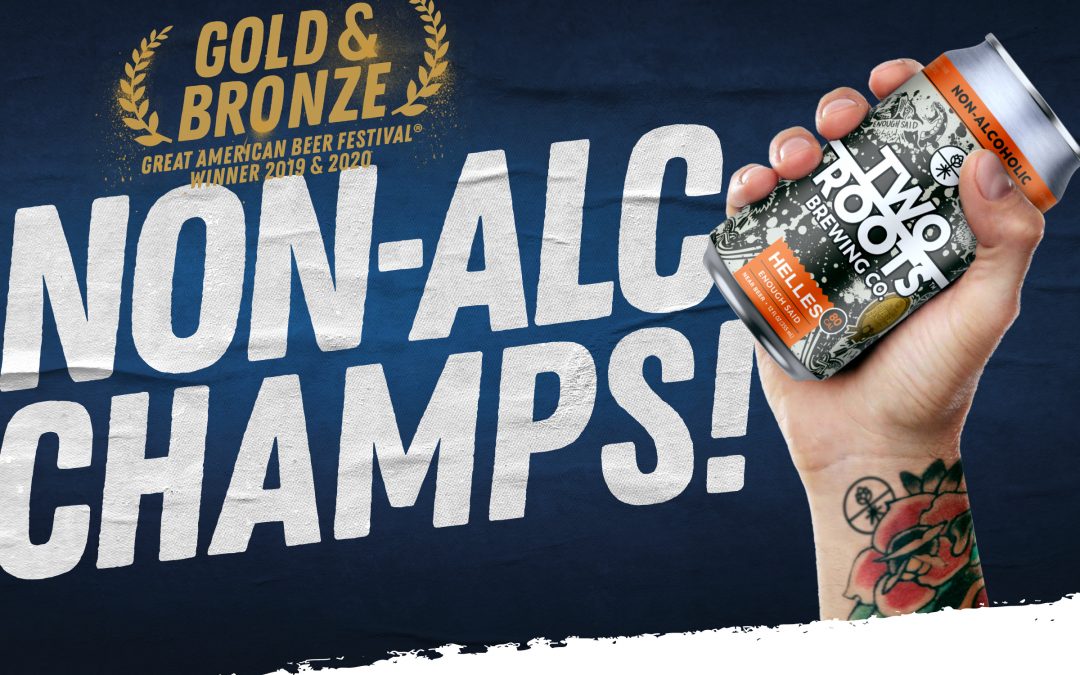 Just in time for the summertime heatwave, the award-winning Two Roots Brewing Co.™ has made their highly-anticipated arrival in the Grand Canyon State.

With their refreshing take on non-alcoholic craft beer, Two Roots is smashing the flat, flavorless stereotype and serving up a trio of beers that would make an amazing addition to any menu. In late April, the team at Hensley Beverage Company signed an agreement with the brewing operation, welcoming them to our southwestern state. As of early May, the product is available on retail shelves – and it’s been an even bigger hit than we could have ever expected.

It’s no secret that when it comes to developing a five-star beer with zero alcohol content, brewers face a sizeable challenge. Specialized equipment, refined processes, and some serious skills are required, not to mention a mastery of the art of brewing.

Two Roots Brewing Co. maintains two brewing operations in Auburn Hills Michigan and their headquarters in San Diego, California-where the journey to a new kind of non-alcoholic beer began. Both locations are outfitted with the very best in advanced operational equipment, setting the stage for the development of a precise process that prioritizes flavor, quality, and consistency alike.

The process for making Two Roots’ non-alcoholic craft brews separates the beer from the alcohol via a gentle de-alcoholization process that involves vacuum technology. As the alcohol is separated from the beer, it loses some of the natural flavors and aroma – which Two Roots then meticulously reintroduces to preserve the authenticity of the drinking experience.

What makes this production process even more notable is that Two Roots is the first craft brewing operation in America to put this technology and process into practice, demonstrating their unparalleled commitment to innovation and technology.

Two Roots isn’t just leading the industry when it comes to cutting-edge operations; they’re also blazing a trail in many other ways. Their consecutive wins at the 2019 and 2020 Great American Beer Festival® marked the only time a non-alcoholic craft brewer brought home wins two years in a row.

In 2019, they were awarded the Gold Medal for their Enough Said Helles, and their Straight Drank IPA won Bronze in 2020, both in the category of Session Beer or Non-Alcoholic Beer. If that wasn’t impressive enough, in 2021, the brewer cleaned house and took home three medals at the Australian International Beer Awards, Straight Drank took Silver and both New West IPA and Enough Said Helles took Bronze medals.

For Two Roots Brewing Co., receiving this recognition is a much-appreciated confirmation of what the brand’s biggest fans already know: they’ve crafted a lineup of non-alcoholic beers that are changing the market forever.

A Tastemaker Trio of Non-Alcohol Beers

As Two Roots debuts its non-alcoholic beers for sale in Arizona, it’s bringing three exciting new beverage options to the table. Retailers have already begun stocking up on all three varieties, and both craft beer enthusiasts and patrons in search of an alcohol-free alternative are loving them so far:

All three styles can be ordered in six-packs of 12-ounce cans, offering up the ideal opportunity for consumers to try every variation of the Two Roots beers.

With such a groundbreaking beginning, Two Roots is slated to be a big name in the industry going forward. Their plans for the future include their continued expansion into beverage markets across the U.S., and they’ve also just introduced their non-alcoholic Chelada Lager.

Are you thirsty for an award-winning addition to take your beverage selection to the next level? With a recent press release putting the non-alcoholic craft beer segment at a growth rate of 300% year-over-year, you should be. The demand is out there, and Two Roots has just poured up a very valuable supply of premium products.