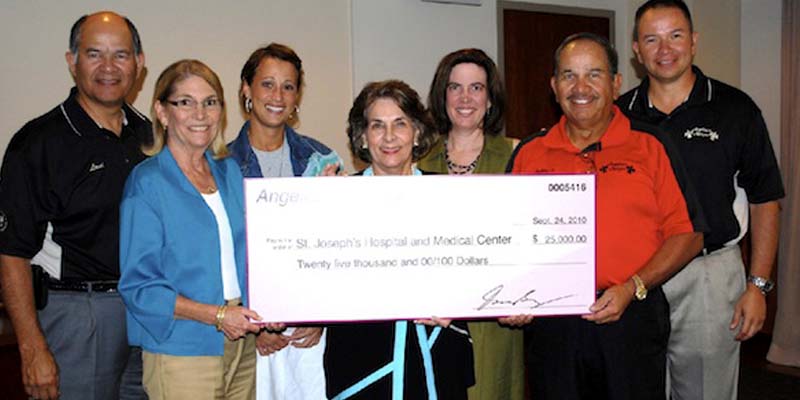 Angelita’s Amigos’ focus is to raise dollars to refurbish and support family rooms at St. Joseph’s Hospital in Phoenix, Arizona.  To date, well over $250,000 has been given to the hospital for equipment and the remodel of ten children’s patient rooms, making it a friendlier and a more comfortable setting for the families.  Each of the refurbished rooms has a flat screen television, play station, rocker/recliner, and day bed for the parents.  A complete renovation of the restrooms (a Hyatt Regency style room) has also been made.  The children who stay in these rooms, most often have a terminal illness and therefore have an extended stay in these rooms for their final days of life.

The concept of refurbishing rooms so that children and parents are more comfortable, not feeling as if they are sleeping in a hospital room, psychologically provides a stress relief, along with a family/intimate accommodation.  This model of refurbishing hospital rooms is the brainchild of Robert and JoAnn Olivas who witnessed their uncomfortable stay at St. Joseph’s Hospital when their daughter Angelita spent her last days in treatment for Leukemia.

Thus, Angelita’s Amigos Inc., was established as a private, non-profit organization dedicated to the refurbishing of hospital rooms and programs at St. Joseph’s Hospital.  Each year, the organization offers a golf tournament, with the proceeds to benefit the hospital. For more information on the tournament, or to register to play, please visit http://www.angelitasamigos.org/.

Robert Olivas founder of the Angelita’s Amigos acknowledges one of the major companies that has been with him from the beginning.  “Hensley Beverage Company has a rich history of sustaining support for the Phoenix area Latino community.  A social responsive and progressive thinking company, Hensley is attuned to the needs of the greater community and is recognized by the Latino community as a committed partner and leader.  Since the inception of the Angelita’s Amigos Golf Tourney, Hensley has been a prime sponsor who understands the need to support the mission and goals of Angelita’s Amigos Inc.  Hensley Beverage Company can stand proud as a founding sponsor who understands and is committed to family wellbeing, especially for families whose children have a terminal illness and have no choice but to comfort their children, sleep and pray as a family in a hospital room. Angelita’s Amigos is grateful to Hensley Beverage Company for their sustained support”.