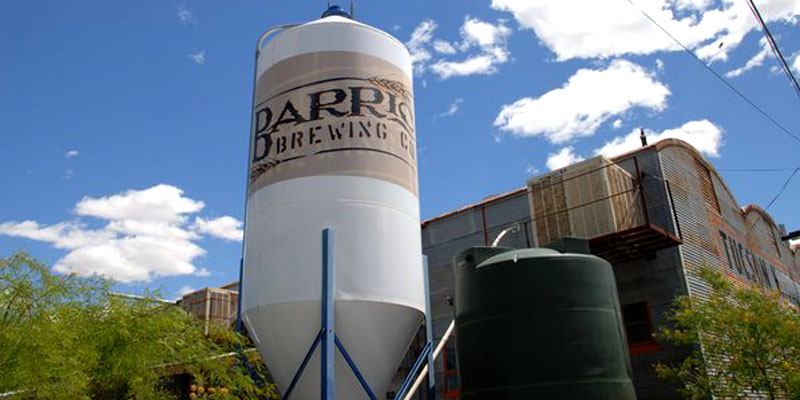 Barrio Brewing Company started in 1991 as a small restaurant named Gentle Ben’s in Tucson, Arizona. Owners Dennis and Tauna Arnold opened the restaurant with a pioneering spirit, a love for craft beer and an aspiration to change the landscape of Arizona brewing. The restaurant quickly gained popularity and transformed into Gentle Ben’s Brewing Co. – one of the first craft breweries in the state of Arizona! As the years passed, the brewery expanded its product offerings and proved that there was a demand for craft beers in the national market with their flagship beer, the Tucson Blonde. In 2007, Dennis and Tauna purchased a 22,000 square foot space just south of Tucson and relocated to the larger space in order to keep up with consumer demand. With the move came a bold name change to what we now know as Barrio Brewing Company.

Today, the Barrio brews can be found in both can and draft form across the state of Arizona and beyond. Their brewing philosophy combines passion and patience to adopt a stress-free, Type “B” Personality much like the type of people that the brewery attracts. The actual brewing space can be categorized as eclectic and unique where many of their machines have been given nicknames such as the Big Kanook or Las Dos Hermanas. As seemingly laid-back as the operations may appear, the Barrio Brewing Company also features many advanced tools and technologies such as the Orbisphere 3100 and the Barrio-style science of brewing which balances 667 components in each beer. A major responsibility for Steve Thompson, Director of Brewing Operations, is maintaining consistency among those components with the most important aspect being yeast health which is a rather delicate dance. Since living yeast is the key to beer parameters such as taste, Steve Thompson strives to achieve a harmonious balance of flavor, experimentation and quality from start to finish.

In conjunction with the science behind brewing each top-notch pour of beer, Barrio places emphasis on proper sanitation of all environments that the beer comes into contact with from fermentation to packing and understands the importance of proper aging times for each profile and desired clarity. In true Barrio form, each beer in their portfolio is brewed with patience to ensure that every vessel is aged to perfection.

Now known as the oldest continually brewed beer in Arizona, Barrio Brewing Co. currently houses 12 fermenting vessels and puts out 85 cases of canned beer each hour in addition to hosting brew tours, running a bar and restaurant, and hosting a myriad of events. In the spirit of their efforts, each year Barrio is awarded microbrewery excellence recognition while maintaining the grass roots feel of their humble beginnings to bring Southern Arizona the best in craft brews.