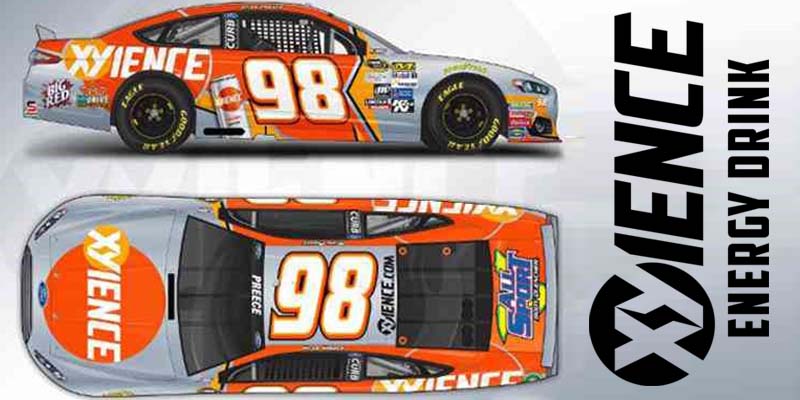 XYIENCE Energy Drink, a subsidiary of Big Red,Inc., announced its sponsorship of Ryan Preece and his No. 98 Chevrolet with Premium Motorsports. The zero-calorie energy drink will serve as Primary Sponsor for the 2013 NASCAR Whelen Modified Tour champion for the Sprint Cup Series events at Texas Motor Speedway on November 8th and Phoenix International Raceway on November 15th.

“I am extremely excited to be able to team up with XYIENCE for the Texas and Phoenix races,” said Preece. “I tend to drink energy drinks on a regular basis and after trying XYIENCE it has become my go to drink when I need that extra bit of energy or focus. I am pumped to be representing this brand and doing all I can to make this program a success for them both on and off the track.”

In addition to the Texas and Phoenix races, the 25-year old native of Connecticut will be behind the wheel of the No. 98 Sprint Cup Series ride for the last four races of the 2015 season starting with this weekend’s event at Martinsville Speedway and concluding at Homestead-Miami Speedway. The XYIENCE brand will also join Preece in the season finale as an Associate Sponsor.

“We look forward to sponsoring a young talented driver such as Ryan,” said Gary Smith, CEO of Big Red. “The XYIENCE team is excited for the opportunity to showcase our brand in NASCAR with a talented young driver who is a perfect fit. We have cool things planned for these races and will have a group of guests at each of them to root on Ryan and the No. 98 team.”

“These last four races will be a new challenge for me that I can’t wait to get at,” added Preece. “I have always wanted to race at the larger tri-ovals and look forward to that at Texas and Homestead. I really appreciate the opportunity given to me by Premium Motorsports and the support of longtime friend Tommy Baldwin. I am just a guy who races the weekly/touring series a few times a week and trying to move up the ladder in this sport. I am focused on doing a great job for the XYIENCE folks and everyone associated with this No. 98 effort.”