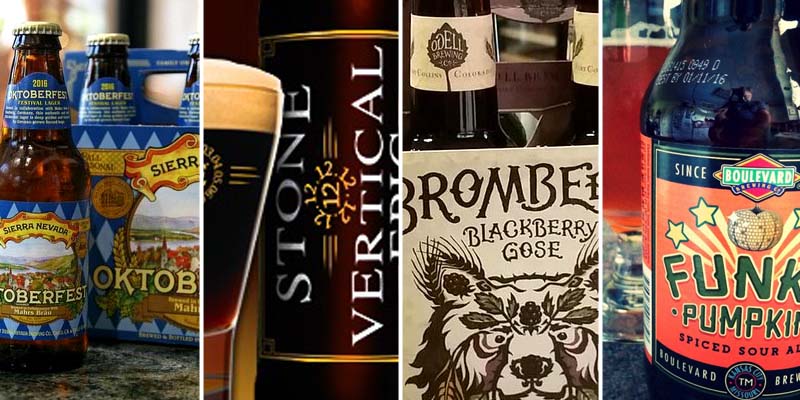 What occurs mostly in September but is named after another month? Oktoberfest! In Munich, it officially begins on Sept 17th and ends Oct. 3rd. In the US, we stretch those dates a little because we just can’t get enough of those Oktoberfest beers. This style is known for being malt forward and utilizing traditional German malts and delicate German hops. Honoring that tradition we have Oktoberfest beers from Four Peaks, Odell, Hangar 24 and Ninkasi. You will be amazed at how different breweries interpret this same style of beer. No two are alike! Compare it with a traditional Weinhenstephan Oktoberfest from the oldest continually run brewery in the world and tell us what you think. Firestone Walker is bringing back Oaktoberfest and each year Sierra Nevada partners with a new brewery to create a different recipe for an Oktoberfest beer collaboration. This year they partnered with Mahrs Brau brewery from Bramberg, Germany. In addition to the standard ingredients found in this style, this one features a unique, long forgotten hop varietal called German Record for finishing. Deschutes takes the variation on the Oktoberfest style further by taking the traditional malt base and then hopping it up in a Pacific Northwest hop country fashion to create the Das-Schutz  Munich IPA. This one is a pubhouse exclusive, so you will have to keep posted to find this one on tap in AZ.

Stone Encore Series (celebrating their 20th anniversary) brings back their 02.02.02 Vertical Epic Ale. They only made 300 cases the first time. I bet they will brew a few more than that this time around. Also being released is a mixed 4-pack containing Stone 5th Anniversary IPA, 10th Anniversary IPA, 15th Anniversary Escondidian Imperial Black IPA and the Stone 20th Annivesary Citracado IPA. Happy Anniversary Stone Brewing Company!

Some seasonal releases you can see hitting the shelves in September. Odell Brombeere is a Gose style wheat based ale which is typically tart from lactobacillus, spicy from coriander, and has a touch of saltiness. Brombeere adds a complex sweetness on top of all that with blackberries. We can still have our warm days in September here in Arizona, and this beer is very refreshing. Also, the pumpkins are back! Mudshark Peaceful Pumpkin, Boulevard Funky Pumpkin and Barrio Pumpkin Porter are amongst the crop for this year. Time to revel in the glory of the harvest! Cheers!