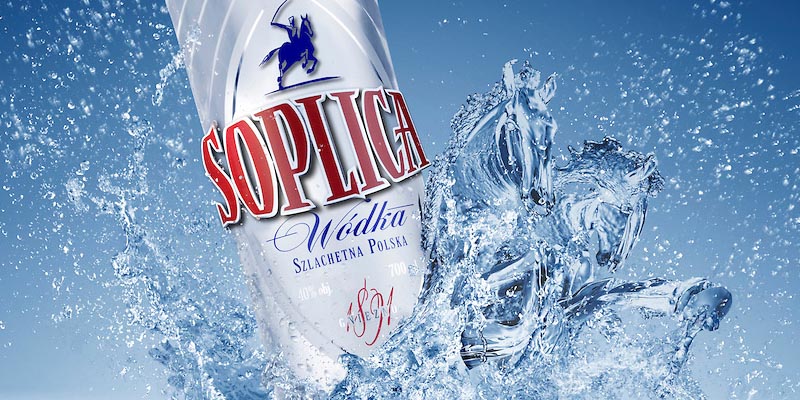 Soplica is one of the older brands of Polish pure and flavored vodka, having been first produced in 1891 (in a factory that was opened in 1888). Although the origins of vodka in Poland can be traced back to as early as the 8th century, Soplica is one of the older industrially produced brands of vodka in the country. Żubrówka, for example, is based on a much older recipe than Soplica (dating back to the Polish-Lithuanian Commonwealth) but exists as an industrially produced brand only since the 1920’s.

The creator of Soplica vodka was Bolesław Kasprowicz, who in 1888 founded the Fabryka Wódek i Likierów w Gnieźnie (Factory of Vodka and Liqueur in Gniezno). The first bottle of Soplica was produced there in 1891, as proven by the replica of the bottle that is held in the Muzeum Początków Państwa Polskiego w Gnieźnie (Museum of the Origins of the Polish State in Gniezno) to this day. Bolesław Michał Kasprowicz (as was his full name) originally came from the town of Czempiń in the Greater Poland voivodeship. Upon starting his distillery in Gniezno, he quickly became one of the pioneers of alcohol trade of the time. Three years after starting the works, in 1891, Kasprowicz introduced the Soplica clear vodka onto the Polish market. In just a few years, the production facility in Gniezno became a large enterprise, processing as much as 3 wagons of pure spirits a week.

During World War I, Kasprowicz’s factory in Gniezno suspended its activity and Kasprowicz himself became involved in nationwide efforts to regain Poland’s independence as a sovereign state following 123 years of foreign rule. From the distillery’s formation until 1913, Kasprowicz’s vodkas and liqueurs earned 73 different awards (including 4 gold medals) on the Polish market and abroad. He became an important figure in the municipality, finally taking office as the city president of Gniezno in 1919. It was not until 1920 that he returned to his role as the manager of his own factory. During the German occupation of Poland in World War II, Kasprowicz was deported to annexed Warsaw by the Nazis and died there in 1943.

The recipes still used for Soplica vodkas and liqueurs were developed by Kasprowicz himself. He was the author of many unique formulas which were handwritten and documented in a tome called recepturarz. All of the wares created by Kasprowicz were marked with the initials B.K. as well as the picture of a carp. The names of all products from his factory referenced Polish tradition and literature. This custom has survived many years, as even now on the labels of modern versions of Soplica vodka there is an image of a dworek (manor houses historically owned by the Polish szlachta) – a reference to the national epic poem Pan Tadeusz by Adam Mickiewicz.

During the first 50 years of its production factories’ existence (1888-1939), Kasprowicz’s firm earned 93 medals and distinctions for the quality of its products. Since 2009, the pure original version of Soplica as well as its several flavored variants have been earning numerous awards in both expert and consumer contests. Currently, the Soplica brand is owned by the Poland-based CEDC. Although CEDC was acquired by the Russian Standard Corporation in 2013, its products – including Soplica – are still made by Poles using their traditional methods. More specifically, Soplica products are manufactured by Polmos Łańcut in the city of Łańcut, which is located in the Podkarpackie Voivodeship of southeastern Poland.