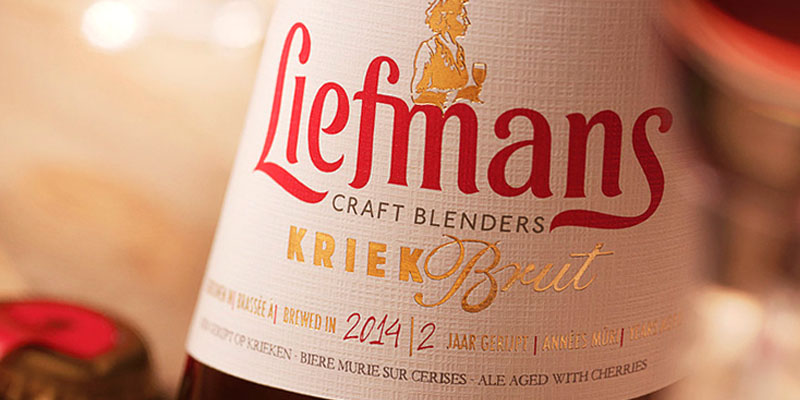 Liefmans produces oud bruin and other Belgian beers and is steeped in the rich tradition of Belgian beer culture. Brewed with a fusion of light, dark, and roasted malt and matured in the Liefmans cellars for two to twelve months after a week-long mixed fermentation process, Liefmans is created with love and craftsmanship. By blending together mature beers and younger brews, Liefmans’ brews have richer aromas with sweet overtones.

Founded in 1679, Liefmans has become synonymous with originality, elegance, and quality. In the early 1900’s local farmers would bring their excess crops of black cherries to Liefmans in exchange for beer, and as a result Liefmans began filling maturation tanks with those cherries. The taste and color of this cherry beer has evolved over years and has been perfected producing the current unique flavor of Liefmans beers.

Liefmans Kriek-Brut beer unites the fresh accents and slightly acidic flavor of black cherries balancing the sour and sweet tastes. Brewed once a year using exclusively Belgian fruit and then aged for eighteen months, Kriek-Brut is the perfect blend of Oud Bruin and pale beer aged on cherries. This deep red beer sports an ABV of 6% and possesses a deep complex flavor of rich cherry with touches of wood and almonds.

Liefmans Goudenband is a distinct dark beer with a dry, lightly caramelized malt flavor which is enriched by fruity flavors of apple and cherries combined with woody notes.
This red-brown aged Belgian beer has an ABV of 8%, and is made with beer of mixed fermentation before it is aged for up to twelve months. Once the beer has matured, it is then fortified with younger beer to reboot the fermentation process. Like a fine wine, Goudenband’s flavors evolve and improve over the years making it a great beer for storing.

Liefmans Oud Bruin is a sour red/brown beer with an ABV of 5%. Oud Bruin has a refreshingly tart aftertaste which is the product of lightly roasted malt and caramel flavors which are perfectly balanced with acidity and sweetness. The balanced flavor of Oud Bruin is derived from special malts which are matured for up to eight months before the beer is mixed with older and younger beers to restart the fermentation process.