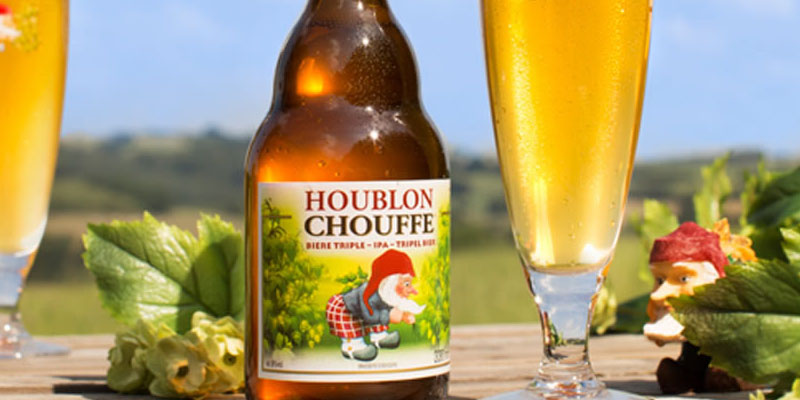 Houblon Chouffe is a hazy gold Double IPA tripel which uses Amarillo hops for dry hopping to develop its signature bitter flavor. Houblon Chouffe was first brewed in 2006, and is one of the firsts in the new generation of Belgian IPA’s. Brewed in the classic Belgian style of brewing, Houblon Chouffe is unfiltered and possesses a big malty body, distinct dryness, and expressive fruitiness with a surprisingly generous alcohol content of 9% ABV.

Upon first pour Houblon Chouffe appears hazy gold with a thick white head and has great retention. The powerful aroma of this Double IPA tripel is a combination of floral, spicy orange, herbal hop notes, with a faint note of honey and citrus. Incredibly thick, creamy, and foamy with lots of carbonation, Houblon Chouffe is hoppy yet balanced pairing American hops with fruity esters and huge malts. The initial sweetness of Houblon Chouffe is complimented by its final hoppy bitterness and a clean dry finish.

Houblon Chouffe marries the English tradition of IPA’s with the American revolution of Imperial IPA’s and the classic Belgian brewing style to produce a one of a kind invention of a double IPA and Triple Belgian Ale hybrid. To experience the full flavor profile of this uniquely distinctive brew, pair Houblon Chouffe with chicken, pork fillet, lamb, tuna, or mussels.