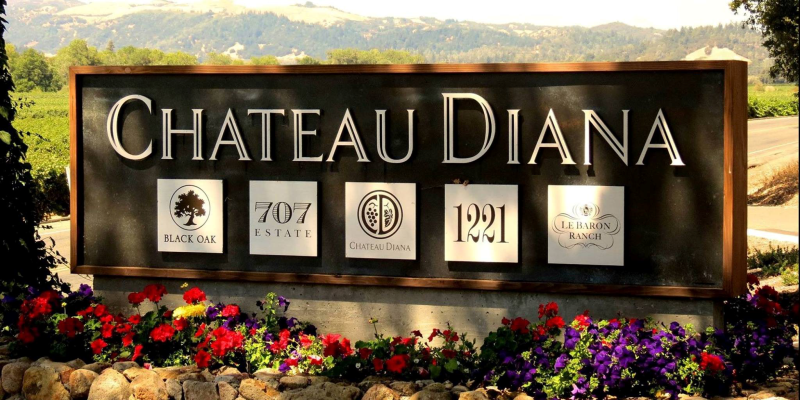 It all began on a bus stop in Long Island, New York: Both Tom and Diane were native New Yorkers with a love for family and tradition. Married with 4 kids, they moved to California in pursuit of the American Dream. In 1984, they purchased the land where the winery now sits on Dry Creek Road. The land was barren but their vision was expansive. Naming the Winery Chateau Diana (“Home of Diana”) was a way Tom could honor his wife and the family she gave him; the one thing that he never had growing up as a young boy on the streets of New York. Tom used to say, “Behind every good man is a great woman.”

As a rebel at heart with a fearless sense of belief, Tom started selling their wines bottle-by-bottle to build the family business. The dream did not die when they both passed away at the age of 65: in 2012 the winery opened its Tasting Room, which was a tribute to the both of them and a reminder that dreams really do come true. In 2014, Tom and Diane’s children continued to celebrate their parents by adopting a Bench in Central Park with their names on it. The love has come full circle and the dream is continuing to live on through their children.

Chateau Diana Winery was founded in 1981, but its beginnings were crafted along a career path that would take Tom Manning, and later, his young family on a coast-to-coast journey. Tom was orphaned as a child and raised by his aunt. Though he never finished high school, he was a hard worker from the age of 14. Sales seemed to come naturally to Tom and he moved through the sales ranks of various companies. Eventually, he found a natural fit within the wine industry.

With his young wife Diane and his expanding family, Tom lived in various states, eventually settling in beautiful Northern California. Residing first in San Francisco, Tom was lucky to be involved in the early days of a rapidly growing wine retailing group, Trader Joe’s. The owner personally selected Tom to develop Negociant Wine Brands. With the rapid sales and success that Tom enjoyed, he seized the opportunity to open his own winery facility in 1981. Affectionately named after his wife, Chateau Diana was born in Healdsburg, CA. Craig, their eldest son, joined Tom and Diane in this exciting venture. Over the next two years, the Mannings developed new wines within the Chateau Diana brand while also looking for a more permanent home for their winery.

In 1983, a dream was realized with the purchase of the LeBaron Ranch encompassing 60 acres in the Dry Creek Valley. 30 years later, the Manning family honors the LeBarons’ legacy of maintaining a family-owned winery. The business continued to grow with a sales office in Southern California, which their daughter Dawn runs herself. In 1991, their other son Corey joined his sister in the family business. The period between 1999 and 2001 held many changes for Chateau Diana and the Manning family, saddest of which was the unexpected loss of winemaker, Craig Manning. The continued growth of the business within this family struggle, including necessary expansions to the winery facility, was shouldered by Dawn, Corey, and Craig’s wife, Donna. Their dedication and commitment to hard work is a deep family conviction and is key to the accomplishments at Chateau Diana. When walking the grounds of Chateau Diana, you can feel the love and care Craig Manning put into the winery before his passing. He is gone but never forgotten.