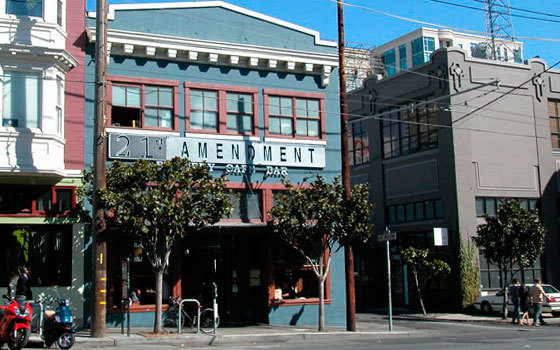 In addition to quickly becoming one of the San Francisco’s favorite pubs, 21st Amendment began expanding beyond the Bay Area by helping to pioneer the movement of canned craft beer. Known for their witty names and delicious brews, 21st Amendment offers year-round selections, as well as seasonal offerings and their infamous ‘Insurrection Series’, a once-in-a-while limited edition release. 21st Amendment Brewery has been medaled at multiple beer competitions.

Blood Orange Brew Free! Or Die IPA is brewed like the original west coast style Brew Free! or Die IPA, but with an abundance of fresh blood orange puree and a twist of citrusy dry hops. The four hop varieties combined with the seven blood oranges makes this brew refreshingly different.

El Sully is a crisp Mexican-Style lager with light notes of spice from Northern Brewer hops. El Sully pours a pale golden color with a frothy white head. The aroma of El Sully is that of corn, grain and grass with a flavor that is crisp and dry with pale malts, corn, grass, grains and a light hop bitterness. This is the perfect beer to enjoy on a hot day.

Blah Blah Blah is a tribute to the prevalence and popularity of IPAs. This double IPA has a deep gold color and is jammed packed with hop flavors and aromas. With nine different hop varieties, on top of late-kettle boil additions, Blah Blah Blah boasts a juicy, hop flavor.

Down to Earth is the natural evolution of Bitter American, 21st Amendment Brewery’s original session ale. Down to Earth is a session ale that is more relaxed than an IPA, but with all the hop aroma and flavor. Whether you have a long mission behind you or a full afternoon ahead, this session IPA will help keep things real.

Inspired by Paul Revere’s midnight ride, Back in Black rebels against the British style IPA, embracing the more aggressive American version and then recast it in bold, brave, defiant black. 21st Amendment Brewery’s Back in Black IPA is a Declaration of Independence from the tyranny of the expected. Brewed like an American IPA but with the addition of rich, dark malts, this beer has all the flavor and hop character you expect with a smooth, mellow finish.