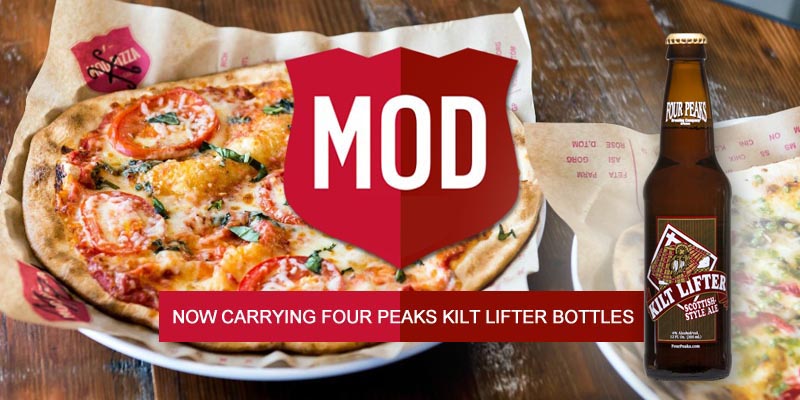 Hensley Beverage Company and Four Peaks Brewing Company are proud to announce that all valley wide MOD Pizza locations will now be carrying Four Peaks KIltlifter in bottles. There are 12 total MOD locations in Greater Phoenix and will now feature our favorite award winning, Arizona brewed Scottish style ale! You can find the MOD pizza location near you by clicking here!

Not familiar with MOD Pizza?

In 2008, a couple in Seattle had an idea. It was inspired by their love of pizza and simple pleasures, and motivated by their need to feed four hungry boys. It was a complicated time—the financial crisis was brewing and many were stressed. Wouldn’t it be cool to bring a bit of lightness and hope into people’s daily lives?

They were motivated to create something unique: an honest, inspiring and memorable experience for customers and team members alike. They started by asking whether it would be possible to create an authentic, fresh, hand-made product super fast? With the help of some really smart, experienced friends they figured it out. Next came the fun part—how to make the experience unique?

What would happen if they allowed customers to choose exactly what they wanted without charging more (a true “no catch” offer)? How low could they set the price and still keep the doors open? It was an experiment, so let’s give it a shot, they thought. And to really make this thing worthwhile, let’s see how well we can pay the team while we’re at it. Charging customers as little as possible while paying the team as much as possible … what a concept!

From the beginning, MOD was an experiment—motivated by the desire to create something really special and inspired by some shared values. How the experiment would turn out, though, was uncertain. How would customers react? Would the team get it? Was the experiment worth the blood, sweat and tears required to go the distance?

Well, something pretty cool happened after they opened their doors in the crazy fall of 2008. They attracted some special people who decided to make it their own. The “MOD Squad” which emerged helped turn MOD into a place where you want to take your family, and where it feels like family. A place that prides itself on providing a special experience to customers and MOD Squaders alike. Like magic, a spirit of individuality, teamwork, and service emerged. That’s what we call MODness. And, the best part is, it’s just starting to spread.