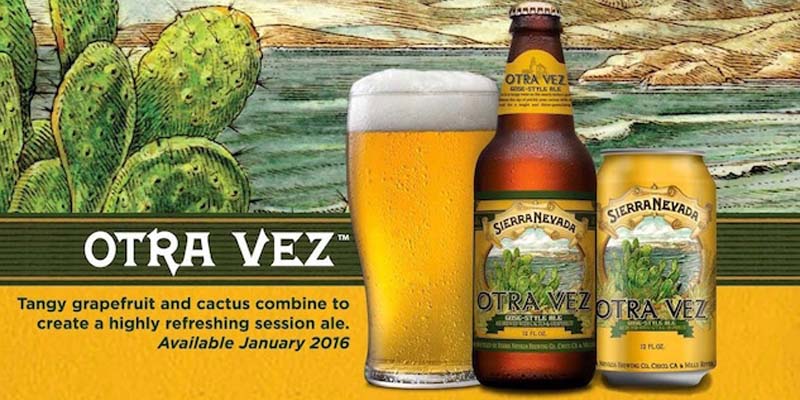 Otra Vez means “another time,” and for Sierra Nevada that time is early California when beers were made from local ingredients. The brewery trialed various native produce searching for great flavors. Prickly pear cactus flourishes in the state’s arid deserts, and grapefruit fills the Central Valley’s flats. Together their fruity-tangy blend makes Otra Vez, whose tartness is true to the gose style, pop with character.

“We wanted to make one of the easiest drinking craft beers out there, and funny enough Otra Vez has been a bear to get just right,” said Ken Grossman, Sierra Nevada’s founder. “We brewed several test batches a week for nearly a year, and even delicate changes made a big difference. Then it all clicked with perfect balance and complexity. We think folks will really enjoy it.”

Otra Vez clocks in at a sessionable 4.5% alcohol by volume, and its extremely low bitterness allows the prickly pear cactus, grapefruit and pinch of coriander to shape a bright and refreshing finish.

Otra Vez will be available throughout Sierra Nevada’s Arizona’s distribution footprint in 12-ounce bottles, 12-ounce cans and on draught. Craft drinkers can track it and other Sierra Nevada beers down using the brewery’s Beer Locator.

About Sierra Nevada Brewing Co.
Founded in 1980, Sierra Nevada Brewing Co. is one of America’s premier craft breweries, highly regarded for using only the finest quality ingredients. The pioneering spirit that launched Sierra Nevada now spans both coasts with breweries in Chico, California and Mills River, North Carolina. Sierra Nevada has set the standard for craft brewers worldwide with innovations in the brewhouse as well as advances in sustainability. It is famous for its extensive line of beers including Pale Ale, Torpedo®, Hop Hunter® IPA, Nooner® Pilsner, Otra Vez™, Kellerweis®, Porter, Stout and a host of seasonal, specialty and limited release beers. Learn more at www.sierranevada.com.