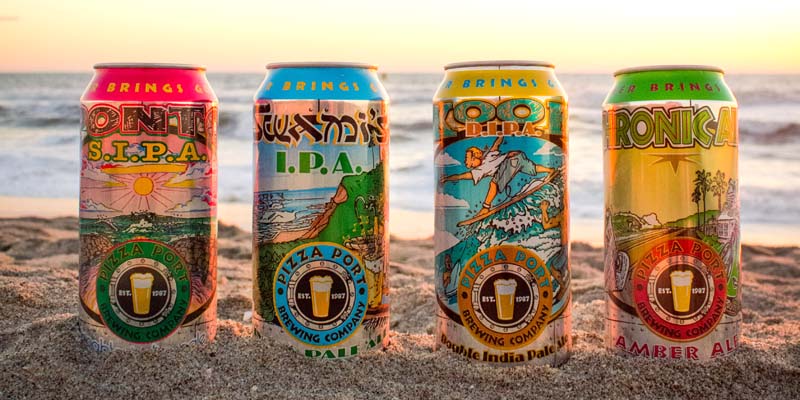 A series of state wide Pizza Port launch parties have been planned at key craft beer locations throughout Arizona on March 22, 23, and 24, 2017.

Founded in March of 1987 by Gina and Vince Marsaglia, Pizza Port Brewing Company began as a small neighborhood pizza place in coastal Solana Beach featuring a local, “San Diego” twist. As the restaurant grew, a small brew pub was installed in 1992, using the same ‘flavor-driven” principles that made the pizza menu so popular. The Pizza Port family’s reputation for great foods and craft beer continued to grow, making them landmarks not just for Southern Californians, but for beer lovers from around the world. Pizza Port Brewing Company now has 5 Pizza Port locations in Southern California, along with a premium bottle shop featuring more than 700 craft beers adjacent to their Carlsbad location. “Over the last 30 years we have enjoyed seeing the crowds of people that visit us from the Grand Canyon State. We are excited for this incredible opportunity to distribute our craft beer throughout Arizona,” said Gina Marsaglia, Co-Owner of Pizza Port Brewing Company.

“There is such a huge synergy between Southern California and the Arizona markets,” said Gordon Penberthy, Brand Manager at Hensley Beverage Company. “Pizza Port’s 30-year history, in addition to an impressive collection of awards make them an ideal fit for a portfolio that already boasts some of the best brands in the world. Pizza Port’s unique approach of allowing individual Brew Masters to create and innovate are really what make them a unique brewery. We’re looking forward to not only introducing some amazing core brands to Arizona, but also some of the cool special release brews produced at the individual locations.”

Pizza Port Brewing Company year round and select seasonal and specialty beers will be available from Hensley Beverage Company throughout Arizona beginning the week of March 27, 2017.

A west coast pale ale, this bright DPA has tones of citrus and agave.

Named after the southernmost beach and surf break in Carlsbad, Ponto truly embodies the spirit of the southern California lifestyle. Refreshingly light in body and low in ABV, there is certainly no sacrifice in hop character with this sessionable IPA. With a hefty dose of American and New Zealand hops, this beer is bright and filled with hints of citrus, pine, and tropical fruit.

Historically brewed with hemp seeds, Chronic Ale has been a staple at Pizza Port for over a decade! This mellow amber ale is the most popular beer in all of the pub locations as it agrees with everyone’s palate and goes great with pizza. It was a dream come true to finally put it in a can and give people the chance to carry it with them wherever they go!

Swami’s IPA is a special beer to the Pizza Port family as it was the first IPA brewed in its original location over 20 years ago in Solana Beach. With a more traditional hop profile, this beer is the quintessential example of a West Coast IPA as it showcases the fresh bitterness of citrus and pine. Swami’s is named after one of the most famous surf breaks in San Diego county, which, as perfectly depicted on the can, is always crowded with surfers and paddle boarders alike. The break itself gets its name from its proximity to a Self-Realization Fellowship, a landmark in Encinitas that is also perfectly pictured on the can. Whatever your form of meditation is, we hope that each and every sip contributes to your own self-realization!

Thanks to a strong malt backbone and a bright citrus hop character, Sharkbite Brewing Company main stay for over two decades. This beer will always be near and dear to the Pizza Port family as it was the very first beer produced at our original location in Solana Beach.

4.8% Golden Ale made with pilsner malt and Cal Ale yeast. These characteristics plus the addition of Mt. Hood and Hallertau Blanc hops lend to a light, crisp, crushable beer with hints of lemon and pepper.