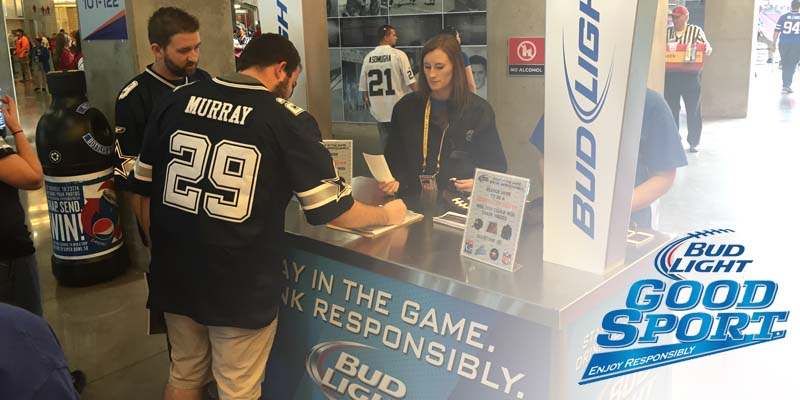 Hensley Beverage Company and the Arizona Cardinals once again are partnering to bring the Good Sport Designated Driver Program to University of Phoenix Stadium during the 2016- 17 football season. The Good Sport program provides an opportunity for Designated Drivers to win prize packages throughout the 2016- 17 season at all Arizona Cardinals home games at University of Phoenix Stadium. Each prize package contains miscellaneous Bud Light and Arizona Cardinals prizes, including Bud Light NFL Coolies, Bud Light Lime Flying Disks, Bud Light Hats, Bud Light Key chains, Budweiser T- Shirts, and program brochures outlining Hensley Beverage Company and Anheuser-Busch’s continued commitment to responsibility and community involvement. The program is also a part of the TEAM coalition and the NFL Responsibility Has It’s Rewards program, which encourages fans to register to be a designated driver and pledge to not drink alcohol, drive their friends and family home safely, and ensure that everyone always buckles up have a chance to win the ultimate reward for their responsible behavior.

In addition to the Designated Driver prize packages, Rojo Hospitality Group, Hensley Beverage Company, and Anheuser-Busch have partnered with Discount Cab Company by providing vouchers for fans attending Arizona Cardinals home games, proving fans in attendance the opportunity to have a discounted ride home. Vouchers are distributed a points of purchase locations throughout University of Phoenix Stadium.