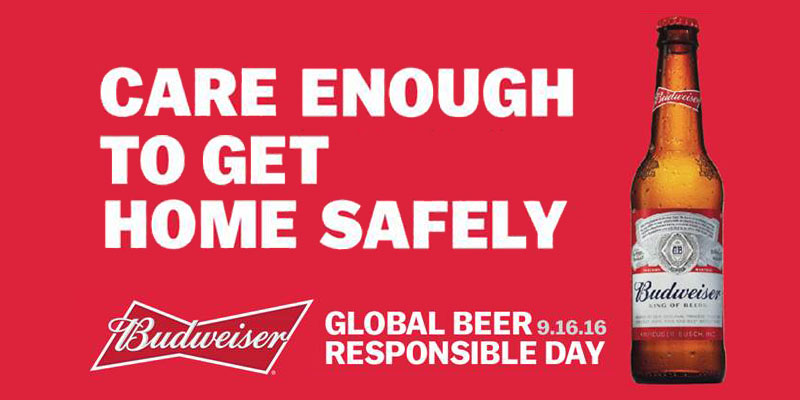 Global Beer Responsible Day is now in its seventh year.  For years we have supported the idea of planning ahead for a safe ride home and this Budweiser campaign helps that message resonate not only with our employees, but consumers as well.  While our efforts to encourage responsible drinking take place all year long, one day each year we participate in this special global effort with Anheuser-Busch and its sister companies to raise awareness for alcohol responsibility.

“At Hensley Beverage Company, we’re determined to play our part in keeping our community safe,” said Doug Yonko, Vice President of Communications, at Hensley Beverage Company. “Global Beer Responsible Day is a great opportunity to come together and stress the importance of responsible drinking. The message is clear: take a cab, call a friend, or designate a driver. Care enough to get home safely. No excuses.”

Anheuser-Busch and its employees build on a legacy of corporate social responsibility by focusing on three key areas: promoting alcohol responsibility, preserving and protecting the environment and supporting local communities. In the past three decades, Anheuser-Busch and its wholesalers have invested more than $1 billion in national advertising campaigns and community-based programs to encourage responsible drinking and prevent underage drinking and drunk driving. Anheuser-Busch reduced total water use at its breweries 15 percent over the last 5 years and by 48 percent over the last 10 years. The company has been a leading aluminum recycler for more than 30 years. Since 1997, Anheuser-Busch and its Foundation have invested in local communities through donations of more than $573 million to charitable organizations. The company also has provided more than 73.6 million cans of emergency drinking water to people impacted by natural and other disasters since 1988. Based in St. Louis, Anheuser-Busch, the leading American brewer, is a wholly-owned subsidiary of Anheuser-Busch InBev, the leading global brewer. For more information, visit www.anheuserbusch.com.