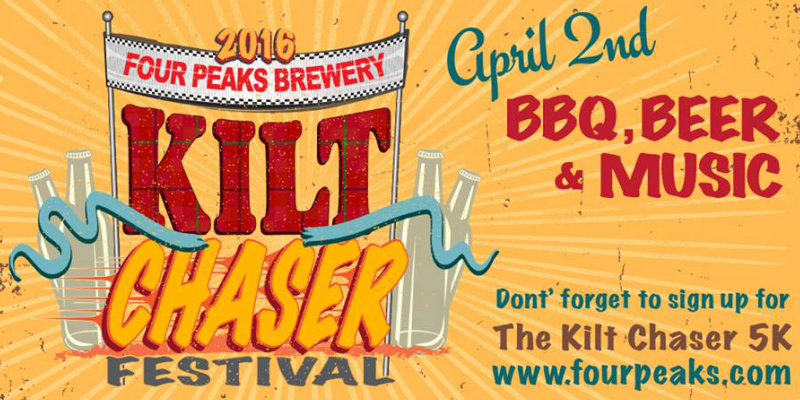 ADMISSION: $5 (Children 14 and Under are FREE) — Proceeds go to the Four Peaks Brewing Foundation

We’ll be starting off the day with our annual 5K run beginning at 10 am. Fashioned after the now-defunct Skirt Chaser 5K model, the ladies will start first getting a 3 minute head start, the guys will then “chase” them down all in the spirit of fun! The race will be run on the quiet Saturday streets near our Wilson St. brewery and will include time chips, an event T-shirt, awards, a post-race beer, and bands to follow. The Entry Fee is $40 which includes admission into the entire days worth events. The party officially begins at 9am so show up early to register and stretch!

Runner registration is now up and running! Register for the race here! The 5K race starts at 10 AM.

What does a $40 registration get you?
• Kilt Chaser 5K 2016 commemorative T-shirt
* Entry into the Kilt Chaser Festival (with live music!)
• 1 Complimentary Post-Run Brew
• 1 Bib Chip

Bib pickup will be at Four Peaks Tasting Room on Friday, April 1 from 4 – 7 PM.

Our friends at BBQ Island will also be holding, for the second straight year, an official National BBQ Cook Off qualifying event in our north parking lot and you will be able to reap the rewards! We’ll have both small and large portions of nationally ranked BBQ available from many of the teams participating for you to purchase throughout the day!

If you’re not that into BBQ, we’ll also have the Maine Lobster Lady food truck available to help satiate that growling you feel in your belly!

Four Peaks will also be hosting the very first Arizona “Best” Fest! The concept is simple, Four Peaks extended an invite to all Arizona Brewers Guild members asking them to allow us to purchase what they considered their “best” beer, the first 18 breweries to respond (sorry, there are so many great breweries and we have such limited space) a spot at the festival. Our goal is to offer both Four Peaks fans and craft beer lovers what we believe is the best cross section of what Arizona has to offer by having the brewers themselves decide and showcase which beer they do better than any other. Our hope is to cultivate this into something bigger each year!

In addition to Muscle Beach, an arsenal of Four Peaks big beers, we will be pouring some of the best brews from breweries all over Arizona!

ADMISSION: $5.
Children 14 and under are free. Proceeds go to the Four Peaks Brewing Foundation. (This foundation helps fund #FourPeaksforTeachers!)

VIP Tickets are now available!
The $75 (plus tax) ticket includes:

• Entry into the festival (not including 5K run)
• 6 Beer Tickets
• Hospitality tent featuring some great BBQ
• Complimentary 4-pack bottles of Sirius Black Russian Imperial (like, for the first time EVER!!)
• Backstage Pass to hob-knob with the talent
• Free hugs from Ted Golden
• Plenty of room to stretch out

(PLEASE NOTE: VIP ticket pricing DOES NOT include 5K registration. Thanks!)

Live music starts at about 11 AM. The lineup will be as follows. We can’t give exact times, however, each set it about 45 – 60 minutes.