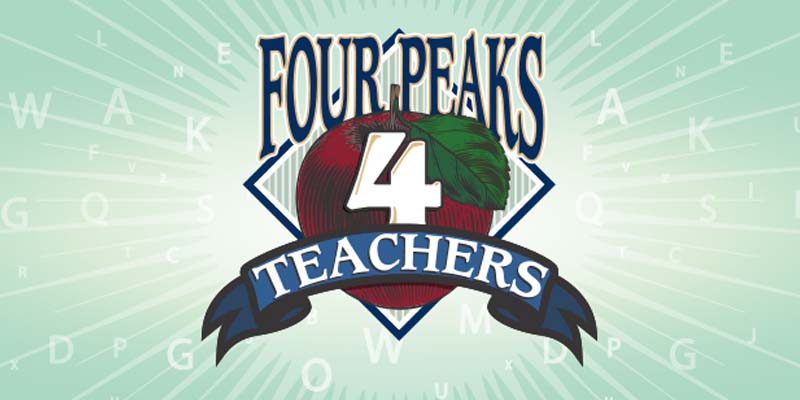 To kick off the campaign, the original Four Peaks Brewery in Tempe and Four Peaks Grill & Tap in Scottsdale, are selling raffle tickets for $5 each for a chance to win a Four Peaks kegerator. The winner will be chosen at the Eighth Street location in Tempe on July 22nd. Winner need not be present. A portion of the proceeds from each daily lunch and dinner special through July 22nd also will be donated.

On June 27 all greater Phoenix Smashburger locations will join the campaign, selling raffle tickets for $1 each for a chance to win free Smashburger for a year.

“Back in 2011, we started Four Peaks for Teachers because teachers are such a special force in our community, and we learned that so many teachers had to spend their own money just to keep supplies in their classrooms,” said Jim Scussel, Four Peaks co-founder. “We knew we had to do something to help, and we are proud to see this program continue to grow year after year.”

Vouchers to receive boxes will be available July 8 through July 17 at the Eighth Street location in Tempe, the Four Peaks Grill & Tap in Scottsdale and all Phoenix-area Smashburgers. Four Peaks, working with Smashburger, Shamrock Foods, Wist Office Products, and Hensley Beverage Co., will then have boxes filled with school supplies ready to be picked up by teachers between July 18 and July 22. Pick-up locations will be announced on Four Peaks’ Twitter, @FourPeaksBrew, and on its Facebook page.

Teachers are given a small budget to purchase supplies for the school year, and when the budget runs out, they often are forced to use their own money to provide more.

“I think that the Four Peaks initiative can offer a huge sense of relief as a new school year begins. Most people do not realize that teachers are only given a very small budget to cover all supply costs for the entire year. After that is gone, and the students have used up the supplies, the teachers end up using a lot of their own money to cover the rest,” said Sarah Van Parys, a teacher at Arcadia Neighborhood Learning Center. “For the love of our jobs and the children we spend every single day with, it is a small price to pay in knowing that we are able to help children learn and grow.”

Four Peaks wants to help take that burden off teachers.

The Four Peaks Tasting Room on Wilson Street in Tempe will host volunteers from Hensley Beverage Co., Four Peaks and members of the community at 7 a.m. on Saturday, July 9, to help create the classroom supply boxes.

You can purchase as many Raffle Tickets as you like, all proceeds will go to funding the Four Peaks For Teachers Program, winner will be drawn on Friday, July 22nd and posted on our website!

Thanks for you support and good luck!