Breakside Brewery Proves Their Medal at the 2016 GABF 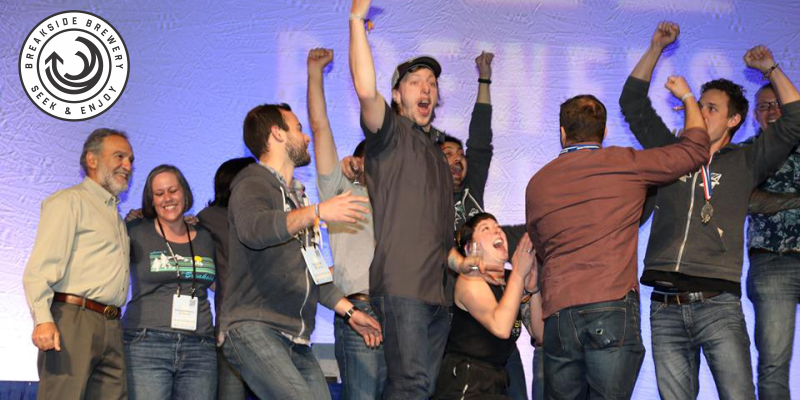 Breakside Brewery continues to gain national attention, this year taking home a Gold, Silver, and Bronze medal at the 2016 Great American Beer Festival in Denver, Colorado. This year’s recognition adds to a long list of awards and accolades, firmly establishing Breakside as a leader in brewing excellence.

The timing couldn’t be better for the Arizona craft beer community, as Breakside looks to expand into Arizona immediately following this year’s GABF, becoming available state wide on October 10, 2016. Breakside will formally roll out into Arizona at a series of three state wide events, beginning October 12, 2016.

The Professional Judge Panel awards gold, silver or bronze medals that are recognized around the world as symbols of brewing excellence. These awards are among the most coveted in the industry and heralded by the winning brewers in their national advertising.

Five different three-hour judging sessions take place over the three-day period during the week of the festival. Judges are assigned beers to evaluate in their specific area of expertise and never judge their own product or any product in which they have a concern.

“Clean and easy drinking rye ale that showcases the complex character of this underloved malt: the rye contributes fruity aromatics, spicy flavors, and a slightly rich mouthfeel. this drinks like a straightforward “microbrew” but the complexity behind it runs deep; hopped with Styrian Golding hops, fermented cool, and made with a water profile very different from most of our beers” 15 IBUs, 5.7% ABV

“Andrew Horne joins us as a brewer and cellarman from Colorado, where he worked at Avery Brewing and Oskar Blues. This is his first recipe for Breakside, an English Special Bitter made with an eye toward balance and clean malt flavors.” 30 IBUs, 6.6% ABV

Our hop forward session beer, built for enjoying any time of day. you’ll find this brew to be full of juicy, classic hop flavor with just enough malt backbone to keep things in balance. we reserve some of our favorite hops–Simcoe, Cascade and Centennial–to use in this beer, which gives the aroma a heady mix of orange marmalade, grapefruit, and resin.” 30 IBUs, 5.2% ABV

Breakside Brewery opened in 2010 in the Woodlawn neighborhood of Northeast Portland as a restaurant and pub brewery. The brewery gained attention early on for its innovative, experimental and diverse beers, while also winning a first medal at the Great American Beer Festival in 2011. In 2013, Breakside expanded operations to Milwaukie, OR with a 30 bbl production brewery filled with 30, 60 and 120 barrel tanks, barrel rooms for wild and non-wild/sour fermentations, and a 24-tap tasting room.